Constitution of the
Republic of Moldova

President of Moldova to brief on latest events in Parliament 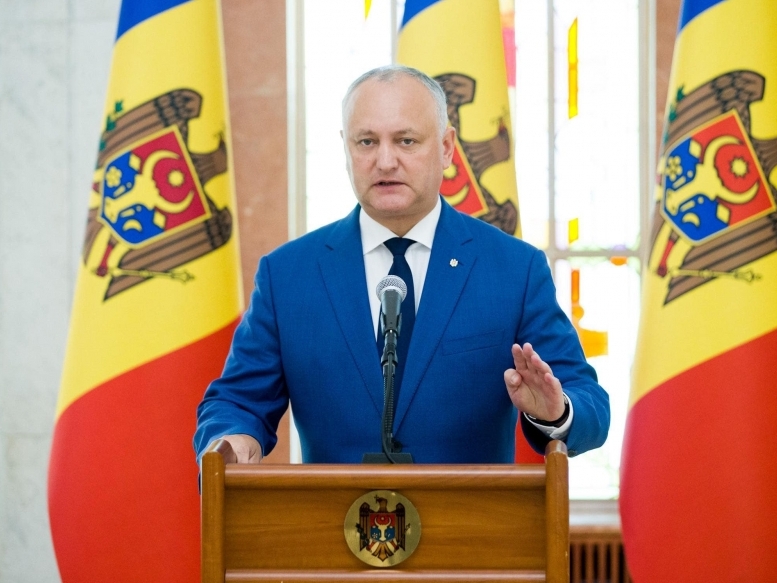 The President of the Republic of Moldova Igor Dodon held a briefing on the latest events in the Parliament, during which he came with a message to the parliamentary opposition, but also to the citizens of the country:

I follow with attention, interest, and concern what is happening in the state legislature. Today, in the Parliament, a new attempt will be made to carry out the necessary procedures for the money granted by the state to reach doctors, pensioners, farmers and other categories of citizens.

This is the 4th attempt by the Government, but, as you may well know, the parliamentary opposition is blocking it. Some of this money could have already reached the people, if the oligarchic parties, supported voluntarily or unconsciously by Ms. Maia Sandu and Mr. Năstase, had not opposed. The arguments that these parties use to block people’s money have nothing to do with reality – it is just an attempt by the opposition to paralyze Parliament with the help of bought MPs.

It is clear that we have an Alliance of Chaos in the Parliament, which wants one thing, the people to live as badly as possible in the country. This suits Mr. Shor and Mr. Plahotniuc, who in vain believe that through this blockade they can blackmail the President of the country and the Prime Minister, in order to solve various criminal problems. Everything is in vain, because we do not negotiate anything with the criminals – either now or later, no matter how many deputies they will buy and how many messages of threats they will send.

This situation of blockade also suits Ms. Maia Sandu, who is guided by one thing: the more the people suffer, the better electoral chances she has. She is completely wrong, and I am sure the people will respond very harshly, when she comes to the citizens to ask for votes, she will first have to explain what it is like to be an accomplice with the billionaire thieves and what it is like to block social projects, along with oligarchs. This blockade also suits Nastase, who after so many lost electoral battles has been dreaming for at least a few days as prime minister.

This is what unites the opposition at the moment – criminal interests, as well as electoral ones! Here is how the Chaos Alliance was formed in Parliament, consisting of Party of Action and Solidarity (PAS), Party “Platform of Dignity and Truth” (PPDT), Party Shor and “Pro Moldova”, in which everyone acts with means at their disposal: some buy MPs, others pretend they know nothing and vote side by side with them, others play the role of oligarchic canneries that aim to divert the attention of the population from corruption in Parliament.

Dear Members of the Opposition,

I decided to come to you with one last appeal before the vote: stop these political games and let the Government give the money to doctors, pensioners, farmers. Stop coming with ridiculous excuses and explanations, go better in parliament and secure the quorum, for which you are paid by the citizens, instead of executing orders from Shor and Plahotniuc.

I am addressing especially PAS and PPDT, I hope that Candu has not bought you all yet and you still care a bit about the people who voted for you. I call on these two parties to go to Parliament and give the Government the opportunity to help the people financially. If you imagine that you will block indefinitely for this money to reach people, you are wrong.

I will do everything necessary not to let you make fun of our citizens. Together with colleagues from the Government and the ruling Coalition, we will come up with decisions that will unblock the situation. You have the last chance today to leave the Chaos Alliance in which Plahotniuc, Shor, and Candu attracted you, to return to the needs of the people. Not these individuals who have stolen the billion need help now, but the citizens who have suffered and still suffer from their theft – of those you have to work for. And if you have other realistic and constructive proposals on how to help citizens, we are ready to listen to them, to discuss them, but first of all prove that you work for the people, not for the oligarchs, come to the Parliament today and ensure the quorum, prove that you have renounced the oligarchs.

I ask all Members of Parliament to show responsibility and ensure the parliamentary activity is unblocked. We have a difficult situation due to the unprecedented corruption that has led to the purchase of many deputies, and the institutions of law I hope will come with clarifications for the society regarding the situation there. But even in this situation, I hope that there are still enough Members who have not been sold and can provide the quorum and votes needed to help citizens get through this complicated period. People need to know that if the money for them is blocked again, they will not be left to fend for themselves, as the Chaos Alliance wants.

We must come together with the Prime Minister with decisions and actions to be with the people in this cynical war started by PAS, PPDT and Plahotniuc/Shor parties, against their own people.

I want to express my regret in front of the citizens for the ugly picture they have to see in the Parliament of the Republic of Moldova, an institution that has become practically without political representation, after a large number of deputies sold out.

But I assure them that the state institutions will do their duty and we will do everything necessary to prevent people from suffering from irresponsible politicians.

At the same time, I will use the prerogatives I have to give the citizens the opportunity to elect a new Parliament, to get rid of those deputies who have betrayed their voters and the country.”